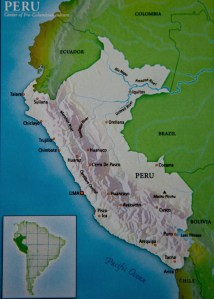 This cathedral was  built after the arrival of the Spanish in mid 19th C and is the landmark of the central square of Cusco. It was within walking distance of our hotel, La Monasterio, which was converted from a monastery to a 5 star hotel.

This bowel was made in the 9th Century AD, an example of pre-Columbian art found in the Museo de Arte Precomombino.

This young man and several others were always about the hotel entrance wanting to sell art work. They would engage you in conversation and want a promise to buy paintings. Amy did buy a painting from a young man who gave his name as Tom Cruise.

This young girl, holding a child who is not hers, wanted to sell beaded objects. She was so plaintive that it was hard to say no. I was able pay her a couple coins for this picture. 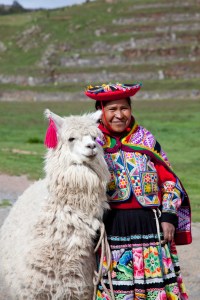 This lady walked the lama around visitors to the ruins of Sacsayhuaman, a monumental fortress just outside Cusco used for ceremonies, asking to be paid for taking her picture. Our guide gave us the pronunciation aid for the  site name: sexy woman.

It was raining virtually the whole time we were at Machu Pichu. During a light drizzle, we noticed a double rainbow. This is at an elevation of about 11,000 ft. 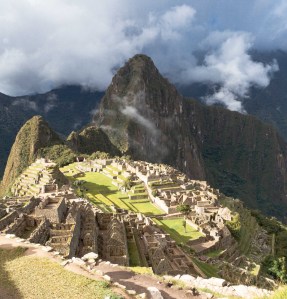 Here is my picture of Machu Pichu during a clearing in the clouds, sunlight shining on the whole city. Walls seen here are only 40% of the height, the rest is below grade. Stones are fit so well that the walls, which incline toward the inside of the room, have survived the many quakes that Peru experiences.