Only six hours 20 minuets on the plane, a snack, and a meal, arriving local time two hours after take off. We stayed at a time share, Sea Temple Resort and Spa, which had a washer and dryer in the room. The was the last clothes cleaning opportunity we took for the duration of the trip.

This is the view of the Great Barrier Reef that we saw from our seats in row 16. We elected to visit the Rain Forest instead of a day on the water. On this leg of the trip we went from the Southern to the Northern Hemisphere and stayed in the Eastern Hemisphere. Australian Customs required that the plane be sprayed inside before we could disembark. 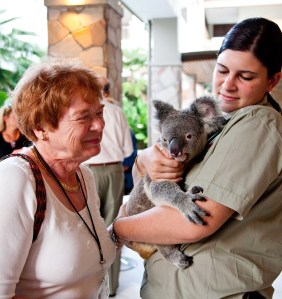 On approaching Australia, were told to expect a special guest at our wine tasting cocktail party, and his handlers might even allow us to shake his hand. Discussion was lively, proposing Keith Urban and the most likely guest. We all hoped that Nicole Kidman would be there, too. Well here’s the special guest.

This gentleman is Robert of the Kuku Yalanji tribe who was our guide through the Daintree Rain Forest at Mossman Gorge. We learned much about the Rain Forest and its contribution to a healthy environment, as well as the aboriginal culture.

Robert performed upon the Diggeri Doo (sp?). One of our pilots bought this instrument; I wonder if he can play it.

Here is one of many shots I took of the canopy. Luckily there was a nice breeze so the mosquitoes were not bad. 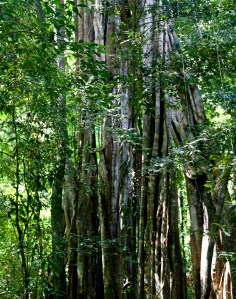 This is a three thousand-year old tree, of which there are a few in the forest. Its roots start just below the canopy and drop to the ground where they spread over a wide area.

This is a birthing pool used only by the aboriginal women for conversation and child-birth. The men’s pool is upstream and never visited by the women.  Most of the aboriginal people have moved out of the forest to homes closer to civilization, education, and jobs. The skills required to live independently in the forest were discussed by our guide.