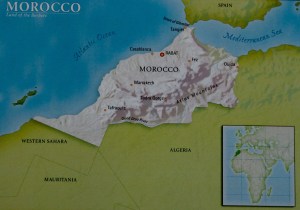 We had another of those over-the-top breakfasts with delicious Morroccan coffee. We then set out to see the town.

I’ll show you some pictures of people we encountered on our walking tour of Marrakech, shot from the hip, as it were, to evade embarrassment. 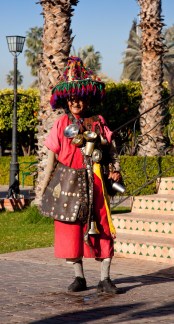 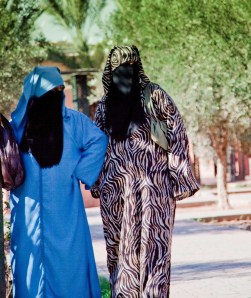 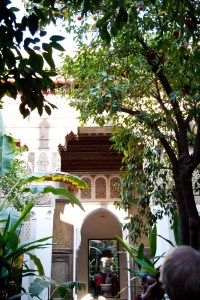 This the entrance to the Bahia Palace, home to a family of high rank, now a museum and wedding venue. This place housed the noble and 3 to 4 wives, each having her own quarters.

Note the intricacy of the carvings seen in the garden court, rivaling the Taj Mahal.

Detail of one of the ceilings in the Palace.

The following  pictures show some of the shops in the souk, bazaar. A busy place full of sights and smells. Amy was led by one of the guides to a pharmacy where she bought 30 grams of saffron for $20.00 US, a good deal!

We visited the Medrassa Ben Youssef. From the street the place looked like every other nondescript structure. Once inside, however, the bustle and street noises disappeared. On the left is the central courtyard around which can be seen windows of the students rooms housing up to 600 at its heyday. On the left is a recreation of a room for a student from the city, containing a copper tea-pot, writing desk, and sleeping mat. Several students might occupy this room at one time.

This is the entrance to La Mamounia Hotel, Marrakech. As you can see, the door minders are quite friendly, speaking Arabic, French, English, and I suppose other languages as well.

The photos below show the spa pool, and the outdoor swimming pool as it looked during our breakfast one morning. One of our group swam in it and stated that the temperature was over 80 degrees F. 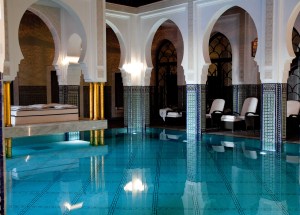 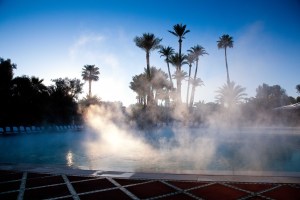