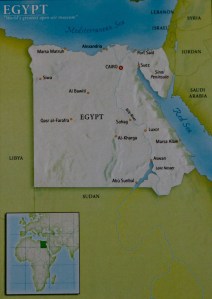 We travel 4 hrs and 30 minutes to Luxor; lunch on the plane. Clear Egyptian Customs and Immigration; check into our hotel: Sonesta St. George Hotel.

Egypt is an ancient culture going back at least to 4000 BC. Approximately 88% are Islamic, 12% Coptic Christians. We had the luxury of three archeologists accompanying us for tours through Luxor, Cairo, and Giza. We toured the Valley of the Kings where another tomb was discovered two days  before our arrival, Luxor and Karnak Temple where we had a private evening party, the Sphynx, and Giza Pyramids.

From the Archeologists we learned that there was little concern that Christians would suffer under the new government. 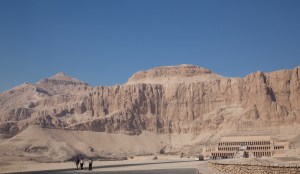 The Valley of the Kings. Note the pyramidal shape of the left-most peak. This valley is on the West Bank of the Nile across from and South of the center of Luxor. Workers creating the tombs of the Kings would walk from Luxor to the valley each day; food was brought for them by the king whose tomb was being built. A new tomb was discovered just two days before our arrival.

We could not take pictures here. We did visit the tomb of Tutankhamen, and saw his mummy and replicas of some of his artifacts. There is an exhibit now in Texas which I saw in Philadelphia in about 2005.

Excavation of the Karnak Temple site revealed a wall and ramp which is thought to have been the landing for boats traveling on the Nile to the temple in times past. The Nile is now about 200 yards away.

Protected from direct sunlight and rain, these cartouches and hieroglyphics are remarkably clear.

These carvings depict ancients at sport: wrestling and fencing are easily made out.

This obelisk was covered by a wall, leaving two shades of color.

A lucky shot of boats on the Nile at sunset. 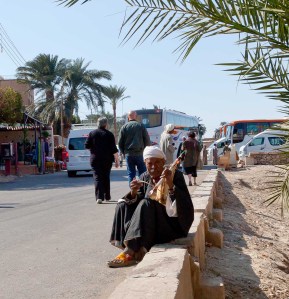 At every site we visited, there were vendors and musicians hoping for donations. Some of the vendors were too aggressive for comfort.

Before leaving for Marrakech, we were treated to a private party at Karnak Temple with quartet music and a sumptuous feast. The temperature was about 40 degrees, making a coat necessary. 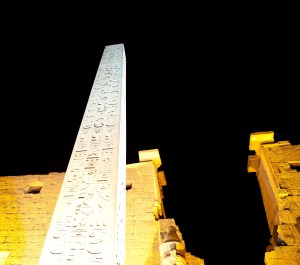 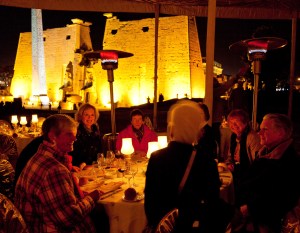 This is the view from our table; we are on the right.

This place was magical at night.