It was a mere 5 hrs and 10 minutes to fly from Lima to Easter Island, time to edit my photos.

Our Pilot was cleared to circle Easter Island, allowing us to see the place from the air.  The main island is thought to have been settled around 400AD by people of Polynesian descent, the for-bearers of the present indigenous population of about 3,000. From around 700 to 1680 AD, the islanders built statues thought to have mystical protective powers; small statues appearing to lack these powers were replaced by ever larger statues, called Moai, ranging from 10 to 32 feet and weighing as much as 82 tons. These were abandoned  during a period of internal wars and cultural decadence.

The small island off the wing tip is where the Birdman cult, practiced from about 1400 to 1860, performed their yearly ritual to elect the chief priest for the next year. 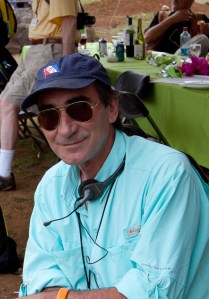 This is Claudio Cristino, archeologist, who, with his ex-wife Pat Vargas, are responsible for clarifying the history of the indigenous populations of Easter Island and others in the Polynesian group of islands. He and Pat restored the Moai seen below. 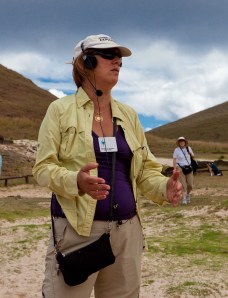 These moai were restored by the archeologists above, a project lasting 5 years. Destroyed during the tsunami of 1966, these statues have been largely returned to their original state except that the topknots, seen upon the second from the right, have not been placed upon the others for lack of funds.

Amy standing in  front of another group of moai. These statues always faced the land; excavations have shown the previous existence of groups of houses occupied by priests and high officials.